In the 2nd Quarter 2014 edition of the Shareaholic Social Media Traffic Report, we reveal data that demonstrates Facebook’s absolute dominance as the leading driver of social referrals to sites across the web. Year-over-year, its “share of visits,” a percentage of overall traffic — direct traffic, social referrals, organic search, paid search, etc. — sites received, skyrocketed, even as it has decreased brands’ organic reach.

This April, we crowned Facebook and Pinterest king and queen of social referrals. As it stands, that is still true. That said, our updated figures will still surprise you.

Our newest study, which focuses on how much traffic the 8 most popular social media platforms referred to our network of sites*, is broken up into two main parts:

Let’s dig into the numbers.

Section I: Social Referrals Over Q2 2014

Our first chart observes “share of visits” for each social network over the months of March, April, May, and June 2014. The final column quantifies how much each social platform’s share has changed from March (end of Q1) through June (end of Q2). 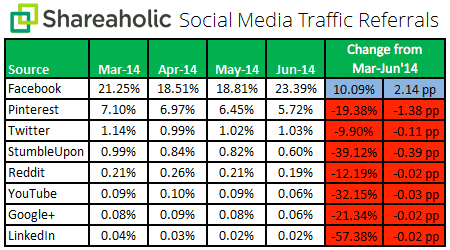 By increasing its share 10.09% (2.14 percentage points), it may be fair to suggest that Facebook stole share from the seven remaining social networks, which lost a collective 1.97 percentage points. 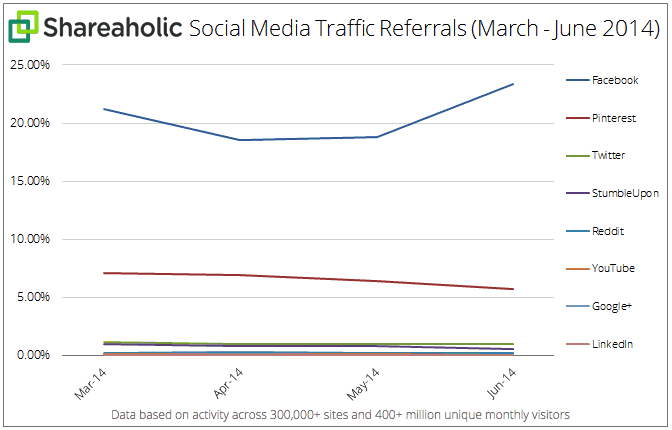 To understand if this was part of a greater, lasting trend, we also decided to look at how “share of visits” changed year-over-year.

Social media is now a well-developed and highly sophisticated medium.

Within seconds, a 140-character message can be shared across the world, in real time. In extreme cases, social media helps pioneer revolutions. For everyday users, it’s a means of discovering and sharing content and stories that matter to them — and that leads to valuable traffic for businesses and publishers.

But how has social media as a source of traffic changed in the past 13 months? The answer is in the numbers below (click to enlarge):

Together, the 8 largest sources of social referrals drove 31.07% of overall traffic sites received last month. Compare that to 15.55% during the same time last year. 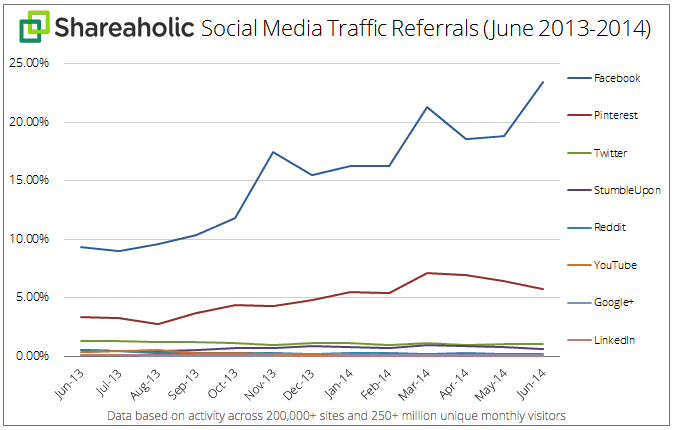 Here are a few key takeaways from this report:

1) Facebook is, by an extremely wide margin, the #1 source of social referrals

6) For the average publisher, YouTube, Google+ and LinkedIn are going nowhere fast as sources of valued referrals

What dramatic traffic trends have you noticed over Q2 or in the past year? Also, if you’re a fan of our data reports, subscribe to our blog so you won’t miss out on the next one. For questions related to this or any other Shareaholic reports, please contact press@shareaholic.com.

* Shareaholic sources data from a network of opt-in websites that utilize its content marketing and publishing tools. Our sites are fairly diverse, spread across tens of different head categories (e.g. food, tech, design, fashion and beauty, marketing, sports, parenting, religion, general news, and many, many more), with sites ranging from independent lifestyle blogs to publishing companies to commerce sites. Furthermore, the size of websites participating in this study varies. Some receive less than 1,000 unique visitors each month while others pull in millions.

** Our methodology is unique in that we utilize a proprietary network of opt-in websites that continues to grow. Rather than working solely with a static list, we take advantage of an expanding data set which is why our sample size for Q2 (300k+ sites reaching 400M+ users) is larger than that for our year-over-year analysis (200k+ sites reaching 250M+ users).

Love what we do at Shareaholic? Join the team or refer a friend.