Make money from your hard-earned pageviews. Monetize your passion with Promoted Content by Shareaholic.

Data (which we also shared with BuzzFeed) confirms, “The shift from search to social isn’t just in progress: it’s already here.” Collectively, the top 8 social networks drove 31.24% of overall traffic to sites in December 2014, up from 22.71% the same time last year. This is significant as brands, publishers and marketers finalize budgets to power a successful 2015.

Over the years (and in 2014, especially), our media consumption habits have changed dramatically. We rely less on homepages and search engines, discovering news pertinent to us through social media and direct messaging on mobile apps.

In the latest edition of the Shareaholic Social Media Traffic Report, we take a precise look at how much traffic each of the top 8 social networks drove to publisher sites across the web. The data reveals “share of visits,” a percentage of overall traffic — direct traffic, social referrals, organic search, paid search, etc. — sites received, for Facebook, Pinterest, Twitter, StumbleUpon, Reddit, Google Plus, LinkedIn, and YouTube.

Our latest report, which aggregates data from Shareaholic’s network of sites*, is broken up into three main parts:

Section I: Social Referrals over Q4 2014

In Q4, only two platforms — Facebook and StumbleUpon — grew their share of traffic. Share for the remaining six social networks shrunk during this time, between 0.46 – 0.01 percentage points. 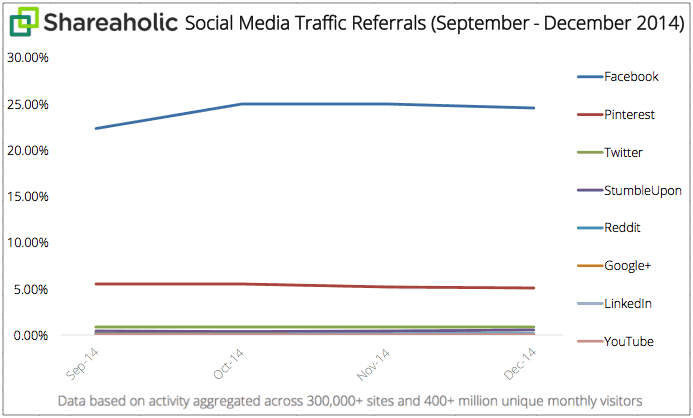 Facebook continues to dominate the charts with few real challengers. Its 24.63% share of traffic makes Pinterest, which drives 5.06% of overall visits to sites around the web, a distant runner-up. Twitter, in third place, captures a 0.82% share. This alone is more than the aggregate traffic the five other social networks send to publishers.

Over the past 13 months, both Facebook and Pinterest have demonstrated the potential of their respective platforms to marketers, publishers and site owners. Year-over-year, they’ve been the only social networks to experience growth in their “share of traffic.” But the difference in growth is remarkable. Facebook’s share rose 59.58% (9.20 percentage points) peaking at 25.06% in October 2014. Pinterest experienced far more modest growth — a 5.82% year-over-year increase (0.28 percentage points). Its share hit an all-time high of 7.10% in March 2014 and has seen steady decline since. 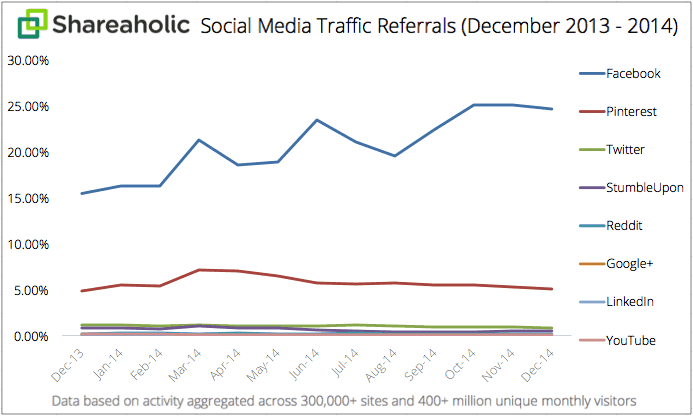 For simplicity’s sake, we’ve highlighted each social network’s respective share for December 2011, 2012, 2013, and 2014 to minimize information overload and control for seasonal fluctuations. The results are startling.

Finally, to admire Facebook’s uncontested dominance, Pinterest’s rapid rise and recent stagnation, and the negligible changes among the other six social platforms, here is our 3-year trend graph. 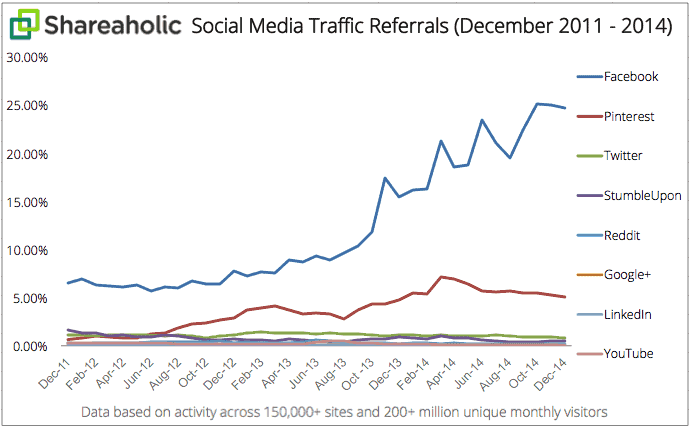 Have you seen the same social traffic patterns over the years? Share any interesting numbers you find in the comments.

For publishers, Shareaholic provides a dead-simple way to earn revenue from ads on your site. Try out our customizable platform.

Also, if you’re a fan of our data reports, subscribe to our blog so you won’t miss out on the next one. For questions related to this or any other Shareaholic reports, please contact press@shareaholic.com.

* Shareaholic sources data from a network of opt-in websites that utilize its content marketing and publishing tools. Our sites are diverse, spread across tens of different head categories (e.g. food, tech, design, fashion and beauty, marketing, sports, parenting, religion, general news, and many more), with sites ranging from independent blogs to publishing companies to commerce sites. Furthermore, the size of websites participating in this study varies. Some receive less than 1,000 unique visitors each month while others pull in millions.

** Our methodology is unique in that we utilize a proprietary network of opt-in websites that continues to grow. Rather than working solely with a static list, we take advantage of an expanding data set which is why our sample size for 2014 (300k+ sites reaching 400M+ users) is larger than that for our 3 year analysis (150k+ sites reaching 200M+ users).