Boost reader engagement and social sharing, and access specialized analytics with free tools for your site, store or blog. Get Shareaholic now!

Holy mother… really?! *High fives all around* What’s even more noteworthy is these numbers are up quite a bit from 2012. The year before, Reddit served:

Effectively, in 2013, Reddit saw a 51% increase in pageviews and an 83% increase in uniques year-over-year. That’s HUGE, right?

We decided to look at our own numbers within the Shareaholic network, which supports 200,000+ websites reaching 250+ million people each month (last month we tracked 322 million people across the web), in order to see how this “growth” translated into referrals to publishers (click to enlarge):

Here’s what we have:

Our data, collected over 13 months (Dec 2012 – Dec 2013), shows how referral traffic numbers trended. Now, the only question worth asking is: Reddit, WTF?! 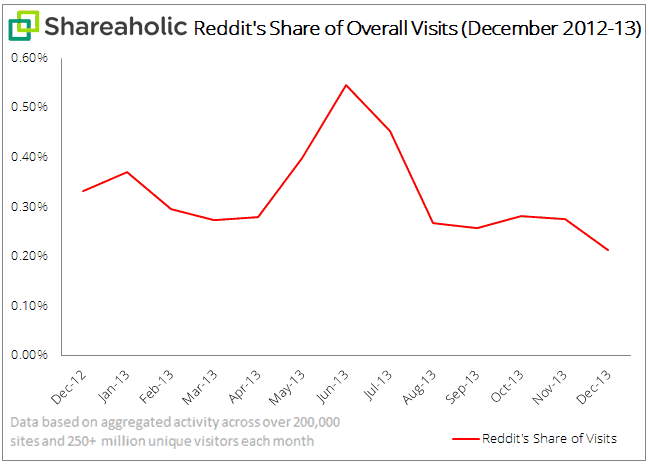 Naturally, we’re shocked when we dug up this data.

While we cannot verify or refute Reddit’s user metrics, what our data does show is a drop in share of referrals to publishers from Reddit. Reddit seems to be hoarding its users and keeping all of its traffic within the social news site; our data, essentially, suggests Reddit is referring less traffic out to sites, which is strange behavior for a social bookmarking site. 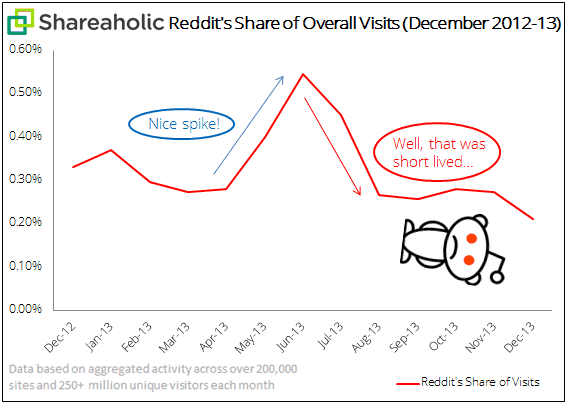 Although activity on Reddit.com may have increased dramatically from 2012 to 2013, sites around the web, sadly, aren’t seeing much of that traffic.

If Reddit is sending fewer visits to sites, web stores and publishers, where else should brands, blogs and businesses turn to for social traffic? Our money’s on Facebook, Pinterest and Twitter. At least, that’s what the data would suggest.

Ok, now it’s your turn to share your thoughts.

How have you seen traffic from Reddit trend for your site over the past 13 months? What do you think is happening here? and what’s the future of this snarky social network?

p.s. if you liked this and other data reports, be sure to subscribe to our blog and get posts about content marketing, traffic acquisition and more need-to-know data.