Whether you want to get people sharing, grow your fans,
make money, or know who’s reading your content, we’ll
help you get it done. Get Shareaholic for your site now!

Welcome to Shareaholic’s Social Media Traffic Report. Our findings are based on 13 months of data collected from our 200,000 publishers who reach more than 250 million unique monthly visitors. It’s been nearly a year since we last released a report, so we are looking forward to hearing your thoughts!

We tracked 8 of the most popular social media platforms to see how they were driving traffic to our network of publishers. Here’s what the numbers mean.

1) Facebook, Pinterest and Twitter are dominating. These three social media power players collectively accounted for 15.22% of overall traffic last month. Given their community and share-friendly nature, it’s no surprise that they top the list in traffic referrals and have grown more than 54% each in share of overall visits. Facebook grew 58.81%, Pinterest by 66.52% and Twitter 54.12%. Pinterest’s growth is especially interesting now that the company is flirting with paid advertising.

2) StumbleUpon and Reddit referrals are declining. The now profitable discovery engine StumbleUpon made its first acquisition last month swooping up 5by, yet their share of traffic driven to online publishers declined 27.47%. Reddit, the effortlessly odd social news site, experienced a 35.16% decline in their respective share of referrals (comparing September of last year to the same month this year).

3) YouTube and LinkedIn are gaining share. Although YouTube and LinkedIn aren’t topping the leaderboard (yet), they’re growing fast. Their share of overall traffic to publishers increased 52.86% and 34.51% respectively. Everyone loves YouTube (and probably spends more time on it than they should). That’s simple. LinkedIn’s growth can partly be attributed to the popularity of the Influencers program and its disruptive media model.

4) Google+ isn’t yet competitive. Although Google+ referred a fair number of visits to online publishers last month (0.04% is a substantial number when we’re looking at a data set of hundreds of millions of visits), it is hardly a leading referral source. Google+ is consistently dwarfed by the competing social media sites. The Daily Muse (via Mashable) notes that there is a lot of conflicting data relating to Google+’s relevance as a social media platform. Our data suggests it probably shouldn’t be a top priority for digital marketers, but — of course — that can change at any moment. (Note: At the same time, we’re not saying marketers should exclude it from their marketing mix entirely). 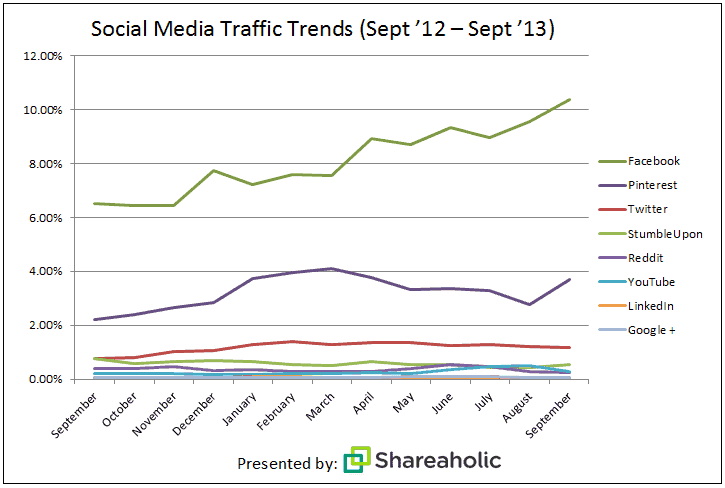 How have traffic referrals from Social Media sites grown / declined for you?

Looking for the latest update here? Our recent Shareaholic Reports may have exactly what you’re looking for. Interested in learning more about this or upcoming studies from Shareaholic? Email us: press@shareaholic.com