At Shareaholic, our discovery and sharing platform powers content promotion for over 200,000 sites across the web. Are you ready to turn your site’s visitors into raving fans? Unlock Shareaholic here.

Our data suggests they were right.

Welcome to Shareaholic’s 1st edition of the Facebook Referrals Report. Our findings are based on 13 months of data collected from 200,000+ publishers who reach 250+ million unique monthly visitors — a significant sample set that allows us to observe general trends in inbound traffic sites receive.

In similar fashion to our Social Media Traffic Report, we tracked how many referrals Facebook drove to our network of publishers and displayed those figures as “share of visits,” a percentage of overall traffic — direct traffic, social referrals, organic search, paid search, etc. — sites received.*

2) In the last month alone, its share of visits jumped 47.44%. Increasing share of visits by 5.60 percentage points in a month is no small feat. But it’s Facebook we’re talking about, and Zuckerberg probably isn’t done shocking the world. 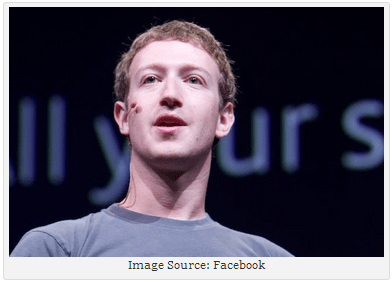 Although Shareaholic does not offer the new FB buttons among our own share buttons, we still track inbound traffic on sites that use any of our other offerings (analytics and related content). Some of our publishers have adopted the new Like and Share buttons from Facebook and are obviously reaping the benefits. Others that use our share buttons still see gains in Facebook referral traffic.

And those gains are remarkable. 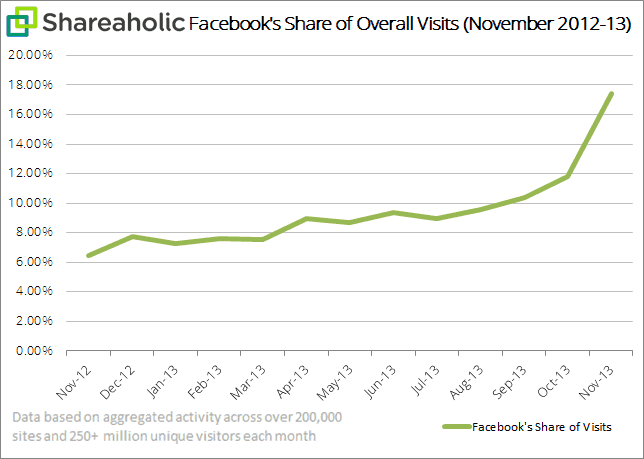 How is it that even though Shareaholic does not offer the new Like and Share buttons that our publishers still realize such substantial gains on referral traffic from Facebook?

I hypothesize that FB users have developed more natural inclinations towards sharing — and interacting with — content for four reasons:

3) The omnipresence of the new Like and Share buttons impacts behavior. Given the usable nature of the new buttons and their widespread availability — Facebook’s buttons are viewed 22+ billion times a day across 7.5+ million sites around the web — people have developed a habit of sharing content they enjoy. Although not all share buttons are created equal, share buttons in general are being utilized more often by readers, thus driving more traffic to sites.

4) Sharing is now an ego-gratifying activity that’s socially acceptable and universally commonplace. Sites such as Buzzfeed, Thought Catalog and Elite Daily produce super viral content that make sharing such a reflexive activity — that also injects you with a healthy dose of serotonin when all your friends like, share and comment on your post. Effectively, sharing great content is now a no-brainer.

Of course, I can be wrong about all of these points.

In any case, our data suggests Facebook drives more than 1/6 of an average site’s overall traffic. Given that it is one of millions of possible traffic referral sources, that’s pretty significant.

How have you witnessed referrals from Facebook grow over time?

* Our data is represented as “share of visits” because the volume of visits (and uniques) our publishers receive changes month-to-month. Last year, we tracked ~250mm monthly uniques; last month, we gathered data from ~320mm unique visitors. Visits grew by a comparable clip too. Ultimately, sharing our raw data — hundreds of millions of visits — wouldn’t enable site owners to appropriately benchmark their site’s traffic against what publishers received.