So Pinterest is a pretty big deal–if you’re a follower of Shareaholic, this isn’t news to you. With the addictive nature of the platform and it’s wild growth over the past 18 months, it’s not surprising contests and giveaways have become popular.

What’s the Definition of ‘Pin It To Win It’?

That question can only be answered by you. Seriously, it’s the wild west right now in Pinterest promotion-land and you’ve probably seen a lot of creative and awesome promotions spring up because if it. Folks use the term ‘Pin It To Win It’ because a) it signifies a Pinterest promotion is running, b) it’s the term everyone knows and is familiar with and that’s partly because of c) it rolls off the tongue so well. There have also been variations of promotions where entrants pin items they want to win.

So why a promotion on Pinterest? Depends on what you’re trying to accomplish. Could be a fun way to give back to your readers, increase site traffic, grow your Pinterest following, bring awareness to a new product, or help rid of excess inventory. The sky’s the limit. And that’s why these ‘Pin It To Win It’ contests have become so popular.

‘Pin It To Win It’ Contest Rules

I know I said there are no such thing as rules set guidelines to a PITWI promotion–but hang tight! While that’s true, there’s a popular Pinterest contest template that many brands have used to run their ‘Pin It To Win It’ contests. Let’s draw up an example.

It’s November. The holiday season is coming up. As the recently hired marketing manager at the Ermahgerd Gingerbread Cookie Company (EGCookieCo for short), your boss is expecting you to make a splash on Pinterest. The promotion might have a title image that looks something like this: 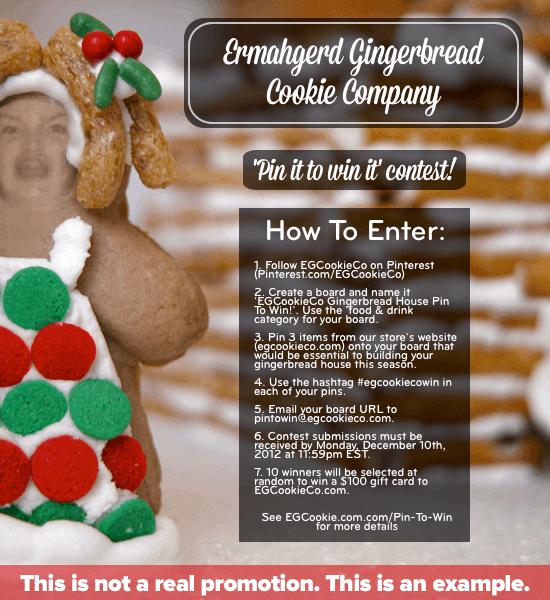 The above example is pretty common. But it’s tried and true. Slap together some terms and conditions along with a free year’s supply of sweets and we’re off to the races. If you’re looking for a ideas for your first Pinterest promotion, this is a great place to start.

Get creative–the sky’s the limit. Why not ask folks to upload their own images to their board? Maybe turn it into a contest where folks compete over who can make the best gingerbread house. Set up different categories and prizes. Go wild!

Or go in a different direction altogether. Design a scavenger hunt. Partner with other bloggers. The possibilities are endless. While you still should keep focused on your promotion’s end goal, sometimes experimenting and trying something completely new pays off. Don’t be afraid to take a risk!

There are so many things to consider when you run a ‘Pin It To Win It’ contest. You’ll discover many of them as you go, but consider the nine below as a starting point.

Boosh! Before you head off to create your own promotion, we’ve got something for you to check out. We’ve teamed up with Shareaholic to run a giveaway of our own. 10 winners will receive a one-month subscription to Rafflecopter’s premium account (to be released tomorrow!) and a Shareaholic tee-shirt (ARV $75 ea., $750 total). Check out the image and enter on the widget below! 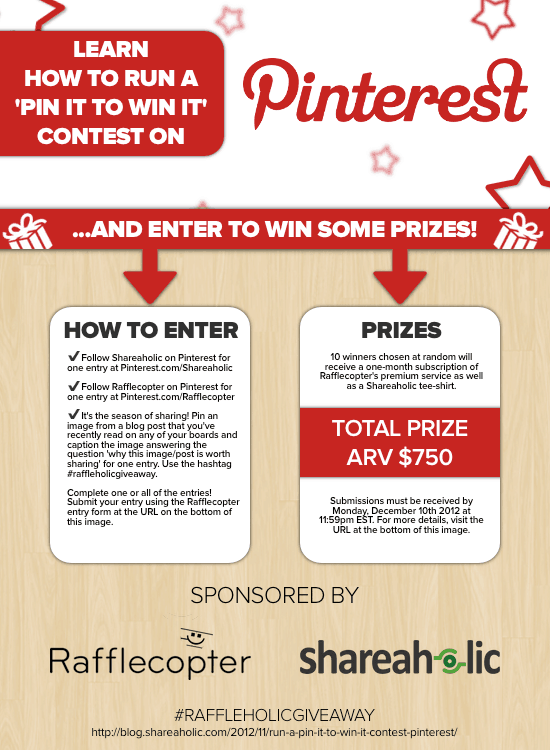 All images pinned in this giveaway will be compiled on a board in Rafflecopter’s Pinterest account. Giveaway is open worldwide and ends at midnight EST on Monday, December 10th. 10 winners will be notified by email.

Enter To Win Below – Good Luck!

Greg Goodson is the cofounder of Rafflecopter.com, an app that makes it crazy simple to run and manage giveaways on your site. Since Rafflecopter’s public launch in December 2011, he’s watched over 400k giveaways launch through their platform.